Blog>Female Empowerment in Fashion Tech: where are we?

Female Empowerment in Fashion Tech: where are we?

Although the working environment at the C-Suite level, especially in the technology and fashion field, still relies on a male majority, the female component is flourishing in the fashion tech, a meeting point between these two segments.

After the election of Kamala Harris as Vice President of The United States and her now-famous sentence “While I may be the first woman in this office, I will not be the last“, another great achievement has been reached in the race towards gender parity.

Nonetheless, there are still some sectors where the presence of women at the C-Suite level is still a rarity. Technology and Finance are two of those sectors.

On a global level, it is estimated that it will take 108 years to eliminate the gender gap between men and women, whose gap is now 68% and women in leadership positions were 34%, according to the 2018 Global Gender Gap Report.

Fashion Technology Accelerator, which has always been a reality with a strong female component within its teams, aims to analyze female entrepreneurship in the fashion tech field, also considering the support that is providing to all those female entrepreneurs who want to make their way in innovation.

Female Empowerment and the Startup Perspective

There is still a long way to go to succeed in affirming female entrepreneurship.

Within the world of startups, considered as innovative and cutting-edge environments, the situation isn’t different from the one of bigger companies: 71% of U.S. startups do not have women on the board and 57% do not have C-Suite roles covered by women.

How is the situation in Italy? In 2020, according to the Ministry of Economic Development, only 13.2% of startups are female led, compared to 21.7% of corporations in Italy.

However, this is often caused by a socio-cultural heritage spread on a global scale, according to which mathematical-scientific skills, as well as the digital ones, remain a male prerogative, as stated by the research 2019 LinkedIn Recruiter Sentiment Italia.

Another important aspect to consider is how female startups are able to raise funds compared to their male counterparts. Indeed, as we said finance has historically been a sector dominated by males.

As reported by the European Commission’s paper “Funding women entrepreneurs: How to empower growth“, in 2017, US-based startups founded exclusively by women entrepreneurs received roughly 2% of overall venture investment by value, even though 38% of startup founders are women. This figure was 11% in the European Union for companies with at least one female founder.

One reason is also related to the underrepresentation of women within the Venture Capital sector. In the United States, recent research has found that roughly four out of five venture capital firms have never employed a woman in a senior investment role, just one in 10 new hires are women and less than 9% of venture capitalists are women.

In the UK only, 18% of investment roles at UK-based venture capital firms are held by women, and a mere 13% of the investment decision-making roles at these firms are occupied by women.

This is not good news for our economy. Indeed, according to a 2018 Boston Consulting Group study, women entrepreneurs generate more revenue than their male counterparts despite receiving lower financial backing.

Even within one of the women’s sectors par excellence, the fashion one, the presence of women in the top management is not so common. However, the situation is considerably changing.

These changes are also driven by the position taken by influential women, who have asserted themselves and are acting as the spokesperson of a collective desire, such as Maria Grazia Chiuri, Dior Creative Director, who has transformed an extremely feminine Maison into a feminist movement, awakening a collective social conscience.

Meanwhile, Sabina Belli, CEO of Pomellato, is involved in the “Pomellato for Women” campaign, aimed at highlighting the need for female leadership, promoting empowerment, and promoting the idea of sisterhood and inclusion, as well as gender equality.

These actions, although very simple, are of vital importance for younger generations, who can observe female role models, be inspired by their path, and approach their dreams with a more competitive attitude.

Rent the Runway, the first platform for fashion rental, was founded in 2008 by Jennifer Hyman and Jennifer Fleiss. The company has raised more than 500 million dollars and in March 2019 it became a unicorn.

Another case is Stitch Fix, founded by Katrine Lake, an online personal stylist that boasts over 2.9 million users and uses data analysis to detect customers’ style and suggest ad hoc products as soon as they become available on the website.

Users, always aware of the latest trends, update their profile to provide personal information. Stitch Fix rapidly achieved huge success and led it to the IPO in 2017 and Katrine Lake has become one of the youngest women to be listed on the stock market.

Julie Wainwright is the serial entrepreneur who has founded TheRealReal, the world’s largest online marketplace for authenticated, consigned luxury goods. The company has raised more than 300 million dollars. In June 2019, the company did an IPO.

Fashion Technology Accelerator has always recognized the value of diversity when selecting an entrepreneurial team. Indeed, considering our current portfolio of startups, 25% of those are funded exclusively by women and 16.6% have at least one woman as co-founder, for a total of 41.6%.

Francesca Tonelli, COO, and co-founder of Vintag, one of FTA’s portfolio companies, states: “I admit I never noticed the difference between me as a woman and the men I met at work. Maybe I was lucky. I must say, however, that founding a tech company has helped me because we are an all-remote company and therefore this agility has helped me“.

Raffaello Bolognesi, CEO, and co-founder adds: “Vintag today has 80% of collaborators who are women and all under 40. Personally, I work alongside a woman who is also my wife.
Sometimes it’s complicated, you need to know how to split up work with the family. But it’s also a great opportunity to get to know each other better and increase mutual esteem “

Francesca Colombo, CEO, and co-founder of Powderly, adds: “Being women favors us because we work in a purely female sector. Fortunately, in our sector the decision makers are for the most part women and this allows us to act in a fast, innovative and flexible way. Being entrepreneurs, but also consumers of the product we deal with allows us to have a particular sensitivity towards of the business that has helped us and continues to help us“

There is still a long way to go to achieve homogeneity and an increasingly frequent female presence, but many signals are aiming towards this direction. 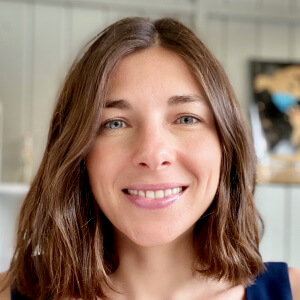 About the author: Giusy Cannone

She is the reference point for FTA’s corporate projects, also creating business connections for startups in the Acceleration Program and mentoring participants of our Masterclasses,

How to pitch a fashion tech startup?

Online Fashion: too many investors?

Female Empowerment in Fashion Tech: where are we? > Latest digital fashion trends: insights into virtual clothing > Ethical Fashion Hackaton 2020: the full report > Bridging the gap between online and offline retail >

Subscribe to our newsletter and get news and event info